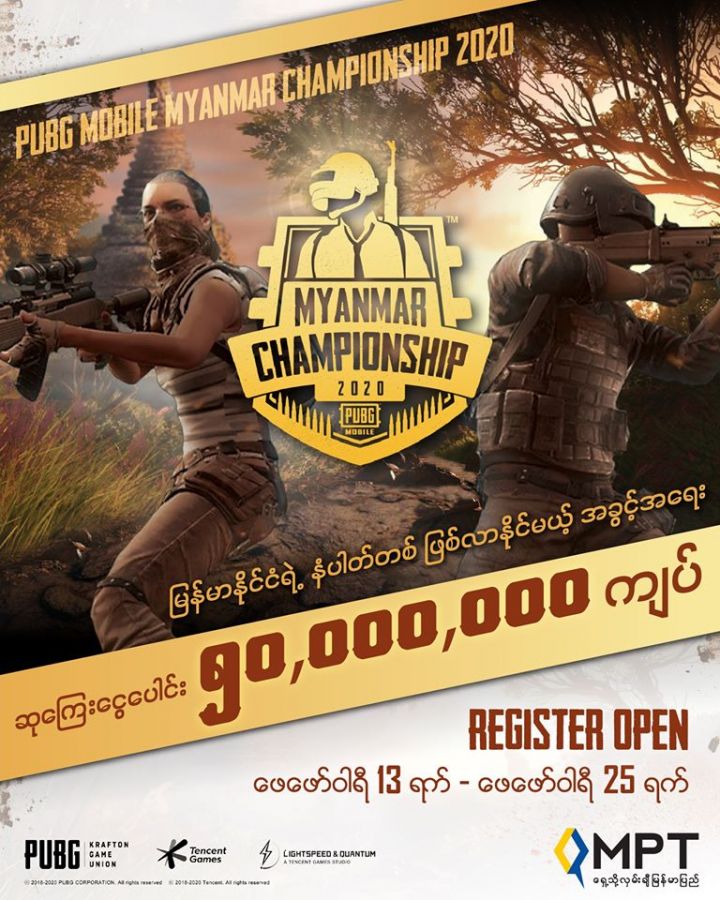 The online registration of the PUBG MOBILE Myanmar Championship 2020 Spring Split is open on February 13 and anyone interested in registering through February 25th will be accepted to join the 1,200 teams.

Yangon, Myanmar, 14 January 2020 : PUBG MOBILE Myanmar Spring 2020 Competition in PUBG MOBILE SEA Final is the most exciting international competition in Myanmar to compete in the PUBG MOBILE Club Opens SEA Final. The contest is sponsored by MPT as the Main Partner.

PUBG MOBILE conducts the PMCO (PUBG MOBILE Club Opens) SEA Final twice a spring and autumn twice a year, and in South East Asia, Thailand, Thailand and Thailand. Vietnam Myanmar, Indonesia Malaysia Lao PDR Cambodia Singapore East Timor Brunei Darussalam It is an offline game where players compete against top players in countries such as the Philippines and the Philippines.

PUBG MOBILE, one of the most popular e-sports games internationally, has seen the potential of the Myanmar E-sports team along with the potential development of Myanmar E-sports gaming industry. To establish a strong E-sports community in Myanmar; Myanmar has been holding online / offline games in Myanmar since 2019 with the aim of enhancing the quality of Myanmar youth players and bringing them to international level competitions.

The top four teams in the PUBG MOBILE Myanmar Championship 2020 Spring Split will now have access to the PMCO SEA Wildcard Final.

Wildcard Level is the only Myanmar / Myanmar non-league league yet. Singapore Brunei Darussalam Philippines Lao PDR The competition is competing in Southeast Asian countries online such as East Timor and Cambodia. Four Myanmar and Laos teams won the PUBG MOBILE Myanmar Championship 2020 Spring Split Competition Singapore Brunei Darussalam Philippines The 12 teams that have won online tournaments in Cambodia and East Timor. A total of 16 teams will compete online for the PMCO SEA Wildcard Final. Only three of the top teams in the PMCO SEA Wildcard Final stage will be Thailand, Thailand or Myanmar. Indonesia The teams will compete in the PMCO SEA Final with teams from Malaysia and Vietnam. Awards will total $ 150,000 at the PMCO SEA Final.

Mr. Head of Gaming Operations of PUBG MOBILE, Tencent Thailand Company. Andrew Manugian said: “This time the Myanmar Championship is exciting. It will be a challenge for the Myanmar team, as it will benefit from the competition, as well as winning international titles and competing with the best teams in other countries. We have seen the Myanmar Championships in Myanmar because we have seen great progress in Myanmar. “We believe that the best teams in Myanmar will emerge and compete in the PMCO SEA Final.”

The online registration of the PUBG MOBILE Myanmar Championship 2020 Spring Split is open on February 13, and anyone who is interested can sign up until February 25th. Registered players must form a team and compete in two levels of Online Qualifier from March 1-16.

Teams will compete in the First Round from March 1 to March 12, with a group of 60 teams split into 20 teams, and the first round will go online. The Live Streaming Group 2 competition will be randomly selected each day. The points from these tournaments to advance to the next round will be counted, and the teams that will receive the first and second points in each group must advance to the second round.

The Second Round will be held from March 13 to March 16, with a total of 120 teams from the First Round from 1st to 2nd round competing in 15 groups of 15 teams. Each group will select 15 teams randomly and Live Streaming 1 group per day. The scores from these tournaments to advance to the second round will be counted, and the teams that will receive the first and second points in each group will advance to the next round.

The first and second teams from the PUBG MOBILE Myanmar Championship Offline Games in the last year and the last two teams have won the competition. A total of 18 teams will compete in the PUBG MOBILE Myanmar Championship 2020 Spring Split Competition. The final will be held on March 29, 2020 at Yangon Convention Center in Yangon. A total of five tournaments will be played in the final stage, counting points from each of these levels and a total of four teams will be invited to the PMCO SEA wildcard final.

Registration and competition details; The following terms and conditions are available at http://bit.ly/pmmcregistration.

How to register For more information on how to do this, visit http://bit.ly/38jCGFr.

You can also learn about the competition on PUBG MOBILE’s official Facebook page at www.fb.com/PUBGMOBILE.MM.OFFICIAL.

About Myanma Posts and Telecommunications

In July 2014, MPT signed a cooperation agreement with KDDI Summit Global Myanmar (KSGM). KSGM is owned by Japanese partners KDDI Corporation (KDDI) and Sumitomo Corporation (Sumitomo). MPT aims to invest $ 2 billion in 10 years in a joint venture with KDDI and Sumitomo to accelerate the development of Myanmar’s telecommunications sector. The move is one of Japan’s largest investments in Myanmar’s history.

MPT, together with more than 8,000 employees, is working with KSGM to continue to develop the telecommunications sector and respect the value of Corporate Social Responsibility. MPT currently serves over 25 million users.