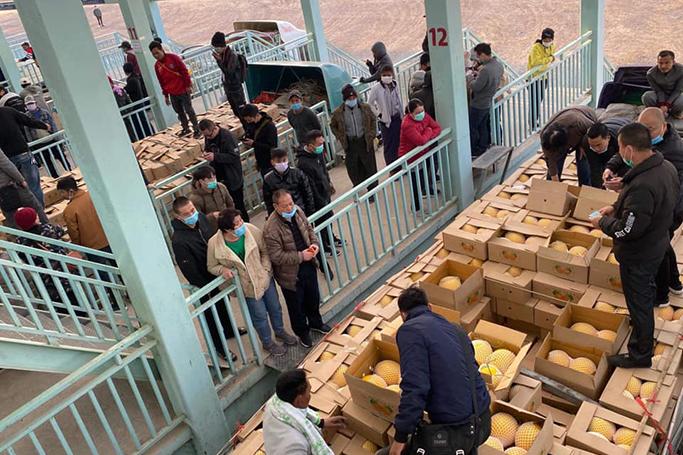 According to Sai Khin Maung, Vice President of Muse Trading, the market is still cool in China, which is the main market for the seasonal fruit market.

“It has been more than 20 days. In between, this is almost impossible. The cars on the road are selling well. The market for a watermelon is 3,000 yuan; It sells for between 10,000 and 12,000. The virus has lost about 80,000 tons of watermelon and cucumber. It is not easy to find a market for export to neighboring countries because of the virus. “So we will have to wait and wait for the Chinese market and come back at the end of this month.”
The Muse 105 miles is usually a day in the market transactions between approximately 300 and 400 units per year, China and Myanmar have learned eight hundred thousand tons of melons and cucumber sweet တစ်သိန်းခွဲကျော် tons are exported annually during this year only a few tonnes of fragrant rice to the environment and to export Fragrant, about 7 lakh tonnes of the remaining export. Local watermelons are mainly focused on the Chinese market, as the watermelon exports about $ 60 million a year, averaging over $ 5 million a month.

In addition, there are between 30,000 and 40,000 bags of rice in the trade zone in Muse, a trade zone of Muse 105 miles away and awaiting the Chinese market to resume.

“At present, China has to export only to China. I heard it would take another two weeks. Other products such as sugar, sugar and oats Corn and maize cannot be stopped completely. ” He said: